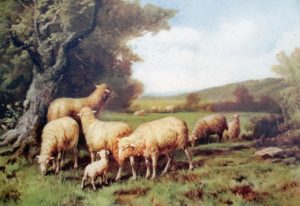 Doing church in a geographically-remote small town presents no small amount of challenges, none of which is more obvious than the mere numbers of people available for any given church event. Relocating from a metropolitan church which was itself larger than the entire town to which I moved, one could imagine a certain “adjustment” would be required. Looking over the congregation from the pulpit on my very first Sunday, I could see this was an understatement.

Any given Sunday could yield 20-50 worshippers. Sometimes, I felt myself counting the bodies which weren’t there, as opposed to those who were. In a large church body, 25 or so bodies may not be missed, though in a small church sometimes even 5 absent is, oh so obvious.

Sad to say that oftentimes my “mood” was severely altered by a lower headcount on Sundays. “Hey, where was everybody?” “I’m here; why aren’t they?” “I spent a lot of time working on this sermon!” The truth was people living in a small town, in a geographically remote small town, had places to go, family to see, and medical appointments many of which happened out of town. Some, still in town, had other things going on.

I am not saying that I am unaware of low numbers, I am; but I did have an epiphany several years back, and it was this: feed the sheep that come. Quite simply, the sheep who did not show up were not going to be the recipients of whatever had been prepared, but I had to ask myself, “Were the ones who showed up deserving of my somewhat sour attitude?” Or, “Were the ones which had shown up still going to get the very best of what God had given to me?”

Truly, there was one answer. God had placed me here…They had come to be nourished. God said in Jeremiah, “Then I will give you shepherds after My own heart, who will feed you on knowledge and understanding” (Jeremiah 3:15). God had allowed me to be the one who feeds them that day. If our hearts are seeking after the heart of God, our desire will be to build those sheep, any sheep, up in Christ, to walk them just a little closer to the Chief Shepherd than they were when they first came through the door.

Many times, for many reasons those pews may not be filled. I’m gonna guess that it’s this way all across the globe, some sheep will make it to the fold on Sunday (Wednesday, or whenever), and others will not. Life is busy chomping on our calendars. It’s gonna be this way until the Lord returns in glory.

If you have been called to shepherd, never forget, never take lightly the divine commission to oversee His flock.

Do you love Him? Feed the sheep that come.