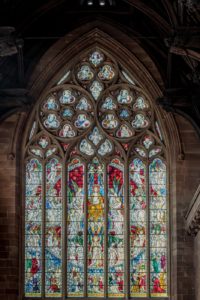 How amazing it is to think that we stand at the threshold of the 500th anniversary of the Reformation, a time in the course of Church history when a great redirection back toward biblical orthodoxy was on the horizon. What this prompts in many minds is the image of a chubby monkish 16th century figure pounding some 95 theses upon the door at the University of Wittenberg. (Yes, I do realize that I may have to confess before Luther someday that I referred to him as “chubby”, but I do this only as a qualitative literary description rather than any judgmental distinctive).

At the heart of the matter was the topic of soteriology, justification; just how a sinful man may enter into eternal relationship with a righteous and holy God. Luther was pressing the issue against the Roman Catholic Church, which had taken a “value-added” approach insisting that works, indulgences, and “membership” in the Roman Catholic Church were the way unto salvation. Luther, rather, insisted it was by faith alone – Romans 1:17 “BUT THE RIGHTEOUS man SHALL LIVE BY FAITH.”

Well, over the next 50-100 years the reformers, Luther, Zwingli, Calvin and the gang had their soteriology pretty well “reformed,” and the “Church” suddenly seemed to have two pretty distinct, divergent streams of thought regarding justification. Hmmm…a partial victory.

As we stand looking at that event I wonder, if the reformers were to all come together again, what areas of “concern” would they be focusing on in the 21st century? Would they choose to redefine, or reform our ecclesiology? Could Christendom use some help redefining our practice and doctrine that has launched some 40,000 denominational structures and para-church organizations? Hmmm. Or, could we revisit the idea of sanctification and holiness in the midst of an ever-compressing secular culture? Perhaps, the whole notion of what it means to embrace the Great Commission needs to be re-examined in light of modernity – How do we faithfully execute this noble evangelical privilege in the context of our world today?

“Waaaiit a minute!” You may say…“Are you suggesting another sola? Sola Fide. Sola Gratia. Sola Scriptura. Solus Christus. And Soli Deo Gloria. We already have 5 Solae. If it was good enough for Luther, Calvin, and Zwingli, then it should be good enough for us! Okay?” Okay, noted, but you must agree that these solae (the plural of sola) are part and parcel of a soteriological caliber–Faith Alone, Grace Alone, Scripture Alone, Christ Alone, and the Glory to God Alone. I got that. But, yes, I am intimating a Sixth Sola and a Seventh and so on... The fact is the greater corpus of truth is composed of many solae. The five upon which we normally focus were those deemed needing re-emphasis at the time. In a desire to redirect an errant ship regarding salvation, these 5 rudders were installed, or, shall we say…reaffirmed?

Sure, there are other areas addressed by the reformers, but this seemed to be at the forefront because a reformation, a reasserted understanding of salvation was so sorely needed. In reality, the solae are the product of man, man-made emphases to reaffirm the importance of lost biblical doctrine or practice. These reformers were simply fundamentalists, the kind which were seen in the early 20th century, who were trying to draw people back into biblical clarity and obedience.

The truth is, “reformation” is always needed, as the balance between truth and opinion (biblical understanding), between complacency and obedience (Christian sanctification) ebbs-and-flows; it is a by-product of the human condition, sometimes we allow weeds to grow right in the middle of a nice garden of orthodoxy.  Doctrine and practices which have fallen out of popularity need to be revisited. One dogma which I fear has been over-looked, understated, or altogether bypassed by the 21st Century Church is the doctrine of loving God.

This is a reassertion of the Shema in Deuteronomy (Deuteronomy 6:4-5); the command from God that Israel was to love the Lord God supremely, and with her entirety.

What is our highest end? Loving God! Glorifying God. Serving God. Seeking God. Worshipping God. Praising God. Pursuing God. Yet, we get bombarded with programs, and activities, and distractions. We debate theological nuances. We could deliberate a thousand more solae, but let us not miss the main focus of our call; let us not forget the chief area of importance–loving our Creator.