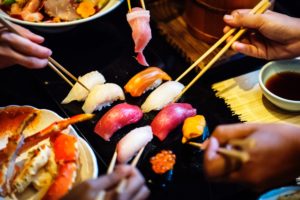 “Hello, my name is Joshua, and I am a Christian. How can I pray for you?”

My wife and I had the opportunity to go out for a special birthday meal at one of those great Japanese restaurants where a bunch of people, often strangers, sit right next to the grill and the chef prepares the food in front of the diners. It was spectacular: soup, salad, filet mignon, veggies and rice, finished off nicely with some birthday ice cream. Mmmm. They put on quite the show, active onion volcano and all. Most everybody around the table was smiling and satisfied.

At some point as we were wrapping up, among the family seated to our left a boy, a boy of 13 spoke to us, “Hello, my name is Joshua, and I am a Christian. How can I pray for you?” His introduction. The first words he had spoken to us ever. In that first sentence he identified who he was, his purpose in life, and his willingness to intercede for us at the throne of his God. Did I say that he was 13 years old? We spoke a few minutes and then, right there at the table we prayed; he for us, and we for him. We left the restaurant that night feeling great, and yet somewhat, oddly nicely convicted.

It was clear that, to Joshua the idea of being a Christian wasn’t just parenthetical, it wasn’t an afterthought, or one-of-many additional demographics defining his personhood–it was the part of his life which most defined him – being a follower of Jesus Christ. To him, Christian wasn’t just an adjective, but a noun – an identity. In less than 3 seconds he had initiated the trajectory of our conversation.

I wonder how many other times this amazing young man has led with these words to total strangers? How many of us float through the day not once identifying ourselves as such, nor being willing to pray for a complete stranger? How many of us have lived next to someone, or worked with them and never once communicated that we are a follower of Christ? How many of us are comfortable allowing God to simply be one-of-the-many demographic markers, an asterisk, of our DNA?

Joshua was excited about his faith, and his purpose. I don’t want to read too much into this, but I don’t have to; his actions speak for themselves. This was a wise kid on the straight and narrow. The following verse was called to mind:

“Trust in the LORD with all your heart
And do not lean on your own understanding.
In all your ways acknowledge Him,
And He will make your paths straight” (Proverbs 3:5-6).

At such a tender age, he was a kid trusting in God, and willing to acknowledge Him to the world, and as Sovereign over his life. Wow! And, did I say he was 13 years old?

What marks your identity? What is your divine purpose? Do you acknowledge God as your Sovereign?

Yes, I had a great meal that night, but the greater blessing was “the salt” seated next to us at the table.

Thank you, Lord, for the witness of Joshua.

I suppose it’s never really too late to start, eh?
Ahem.
“Hello, my name is Kelly, and I am a Christian. How can I pray for you?”