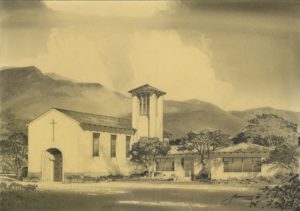 For those who may not yet have heard, we bought a church. By God’s grace Bishop Creek Community Church has finally been able to acquire a building to call “home.”  It is a beautiful building. Vintage church. Architecturally it is great; it was designed and made…well, to be a church. The cost of the church was…affordable. Well, affordable enough. And though many other parties were interested in this property, the Lord seemed to have it placed aside for continued ministry here in Bishop. So glad that this testament to the work of God remained in the community. Perhaps, the cherry on the top is that we have the blessing of St. Timothy’s Anglican Church, with whom we share the building.

To God be the glory!

Honestly, after having been nomadic for quite some time I was beginning to think a building was out of the question. The words, “We closed escrow today” were surreal. Yes, we were joyful. We announced that we had “bought a church.” And in those words, those very words, I was cautioned regarding ownership; I realized that the ownership had never really changed.

700 Hobson Street is still under the same ownership: God’s.

We stand in the footprint of those from St. Timothy’s who have pioneered before us. Who had the vision. Who bought the land. Who raised the funds. Who built the structure, and who have been stalwart stewards. And we are in gratitude for their efforts. It is a great building, but it is a Church building.

We realize that the church building is a place in which we meet; but, it was Christ who bought the Church.

Colossians 1:13-14 tells us how He did that: “For He rescued us from the domain of darkness, and transferred us to the kingdom of His beloved Son, in whom we have redemption, the forgiveness of sins.” He paid a price I could not pay.

I remember, as a kid, playing Monopoly. The money inside the game was fascinating, yet in all truth, it was just play money. It really could not buy anything at all.

Can you imagine coming before the Lord of all creation with play money attempting to purchase your freedom from the domain of darkness? Of course not. No other medium of exchange would do. Not Chickens, yen, pesos, poker chips, or fur pelts. And, you can’t wash dishes in Heaven.

Cults promote many paths to God, to enlightenment. Satan loves confusing the one-and-only acceptable currency. Yet, there was only one currency which could purchase our redemption­–the blood of Christ.

Hebrews 9:11-15 communicates the value of that medium of exchange: “But when Christ appeared as a high priest of the good things to come, He entered through the greater and more perfect tabernacle, not made with hands, that is to say, not of this creation; and not through the blood of goats and calves, but through His own blood, He entered the holy place once for all, having obtained eternal redemption. For if the blood of goats and bulls and the ashes of a heifer sprinkling those who have been defiled sanctify for the cleansing of the flesh, how much more will the blood of Christ, who through the eternal Spirit offered Himself without blemish to God, cleanse your conscience from dead works to serve the living God?

For this reason He is the mediator of a new covenant, so that, since a death has taken place for the redemption of the transgressions that were committed under the first covenant, those who have been called may receive the promise of the eternal inheritance.”

Those words never get old! Christ paid for our redemption with the only acceptable currency: His blood.

He owns us, and has purchased our freedom to His glory. The ransom has been paid in full. We remember, we celebrate that action, and that currency so freely given.

We bought a Church building; Christ bought the Church!