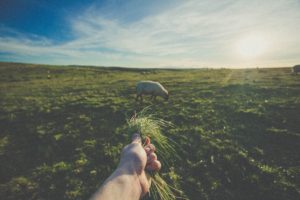 The imagery is brutal; and yet, it is a scene which happens often, all over the world. It is one of a shepherd coming upon a pile of bones and wool in a shallow pool of blood–the remnants of a quick and savage death to one of his flock. His heart sinks as he identifies, through various markings which one it was. He pains for the sheep who perished in a panic at the jaws of 42 razor-sharp teeth. Had he failed to protect the helpless? Had this little sheep wandered too far? Had this endeared part of the family chosen to travel outside the safe clutches of the flock?

Perhaps, the shepherds only comfort at the time was that the attack was sudden and quiet–such a death came swiftly.

Yes, the image is brutal, and the metaphor of one taken down in the church is no less brutal, perhaps even more disturbing as it generally takes longer to succumb to…a spiritual death. A sheep wanders off in search of “something better,” and is taken down, enticed away by the promise of greener pastures. Maybe, a simple moment of distraction. A false shepherd has lured them to swallow the bait. A spouse, friend, or trusted “brother or sister” drags another unsuspecting sheep to its doom. The vehicles could be intellectualism, humanism, materialism, a slew of any given number of “isms,” or just plain sin. Often the shepherds arrive only to see the death throes of a long-extended surrender of compromised faith. And it hurts.

Christians are duly warned by the Apostle Peter, “Be of sober spirit, be on the alert. Your adversary, the devil, prowls around like a roaring lion, seeking someone to devour” (1 Peter 5:8).

The predator is different, presented as a lion who seeks to terrify. Yet, the desire to kill is still the same: to kill the sheep of His pasture. Lions only have 30 teeth, but the outcome is pretty much the same…he waits, for the unsuspecting to wander a little too close to the edge. Let down your guard for just one second, and he is there, ready to pounce. Just far enough away from safety and…and it’s likely over.

Few of the challenges of pastoral leadership grieve the shepherd as much as losing one entrusted to his care, even if it was the sheep itself who chose to exercise its free will to go astray. God extends the liberty to disobey and walk away, and so must we. It is a freedom I have had to reluctantly concede, not often, but often enough. And it hurts.

But, every once in a while, we may be able to celebrate a recovery of sorts; we may get one back. Christ describes the sheer joy of such a shepherd in this situation.

“What do you think? If any man has a hundred sheep, and one of them has gone astray, does he not leave the ninety-nineon the mountains and go and search for the one that is straying? If it turns out that he finds it, truly I say to you, he rejoices over it more than over the ninety-ninewhich have not gone astray”(Matthew 18:12-13).

The image often brought to mind is one of the incarnate Shepherd with a lamb slung over His shoulders making the journey back to the rest of the flock.

I was that sheep. The other fields looked nice. I was in danger, but by His grace, God protected me. God allowed the grace of ruin to turn me back. And He used “shepherds” to woo me home again. The sovereign hand of the Divine Shepherd sought me back. The heart of the Shepherd rejoices to have it back in the fold. I thank God for His grace.

Sadly, the outcome for others is not always the same. I have watched too many turn to Christ in moments of need, only to cast Him aside when things calmed a bit, when they got on their own 4 feet again. It was only a matter of time. My thoughts are that Satan doesn’t care how or when he gets a hold of you; as long as he can bring you down.

Be careful, don’t be led astray.  People who have walked with you, those who have encouraged you in the faith don’t want to come upon a shallow pile of bones drenched in scarlet. More importantly, the divine Shepherd desires to walk with you each and every day.

Let Him walk you all the way home.