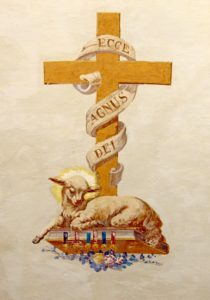 One of the most theologically packed verses in all of Scripture finds itself in 2 Corinthians 5:21 which reads:
“He made Him who knew no sin to be sin on our behalf, so that we might become the righteousness of God in Him.”

It is in this verse we see the answer to Genesis 3:15-the Lord addressing Satan, “He shall bruise you on the head,  And you shall bruise him on the heel.”

It is in this verse we see the fulfillment of Isaiah 53:6:
“All of us like sheep have gone astray,
Each of us has turned to his own way;
But the LORD has caused the iniquity of us all
To fall on Him.”

It is in this verse that we see the words of John the Baptist echoing forth…”Behold the Lamb of God who takes away the sin of the world.”

And it is the work described in this verse for which we thank Christ for His obedience. For it is in this verse we see the work that separates those who once were doomed to death, given the opportunity for new life with God.

In this short verse we see what God has done by the work of Christ for our benefit.

Volumes could be written until the end of time about what is called the atonement…what was performed by Christ in order to bring us to a right standing before God, which was unable to be perfected through any other means. Christ was the agency of obedience. He was the object of the wrath of God. He is the reason we could possibly approach a pure and holy, sovereign God in restored relationship.

In the Levitical order, as a penitent soul was desiring to be “absolved” of his sin, he would bring a bull or a sheep or a goat, maybe a bird to the priest at the Temple. Hands would be laid upon the head of the animal in a gesture that “communicated” all of the sin of that penitent to be placed upon that “innocent” offering. The animal would then be slain upon the altar, at times by the penitent himself (Leviticus 1:1-5), for as Hebrews tells us, “And according to the Law, one may almost say, all things are cleansed with blood, and without shedding of blood there is no forgiveness” (Hebrews 9:22). This animal had borne the wrath of sin in order to place this repentant individual right before God.

The Levitical system then is a foreshadow of the work to eventually be executed in Christ. The altar would be the Cross upon Golgotha…Calvary. The Lamb of God perfect, pure, undefiled would have all of the sin of the world placed upon Him. The murders. The adulteries. The hatred. The gossip. The slander. The lack of forgiveness. All of the sin of the world, from the beginning of time to the end. The burden of Christ was exquisite. Who could bear it?

Only the Messiah for which He was sent.

Some of His last words upon the Cross are “My God, My God, what have you forsaken me?”

The wrath of sin was borne for sin. My sin. Your sin. In order that our broken relationship might be restored with our great Creator.

The Lamb of God shed His blood that we might become the righteousness of God in Him.

For those of us who are truly in Him, God looks not upon our sin, but upon the righteousness of Christ.

Behold! The Lamb of God!