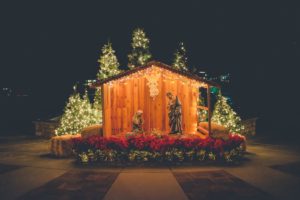 The labor ward – where the working of birthing takes place, a mother-to-be strains in agony to foster new life. And we have all seen those depictions of a man in the waiting room, outside the labor ward at the hospital where a father waits “patiently” for the birth of his child. He paces the floor anxiously awaiting the arrival of the offspring whom he has had the honor to sire. Nine months he has wondered. Nine months he has prepared. Nine months the growing excitement and love has captured his heart…And now after nine months the moment of truth has arrived.  His contemplation is broken with a cry.

Rewind to a labor ward in the southern portion of Palestine, in a small stable of a small town called Bethlehem. This would be the most obscure labor ward of the first century, perhaps of all time. The on-looking paternal unit is not a mere man but the Creator of the universe.  The long-awaited-for-child is not just any child of the day, but the long-promised Christ-child sent to heal mankind from their sins. Yet, there are no paparazzi to cover the affair. No pomp and circumstance. There is not even a coffee machine in a nearby lounge. No sterile white linens or medical aid. Perhaps, the musty smell of manure and straw sate the air – the most humble of circumstances.

Not to anthropomorphize God, not to say that He is anxious or nervous, but can we at least say that He is “pleased”? The Mighty God was miraculously and strategically implanted into the womb of redemptive history. The Eternal Father was injected into the spectrum of time. His plan of redemption which was established before the foundations of the world had been physically placed into motion, some nine months prior with the expectation that the cry of Christ-child would break the silence of a quiet Mediterranean stable, and herald the coming of peace.

Of course God didn’t have to peer around the corner into the stable for an update on the birthing process – He is God, He knows everything. But the birthing was in process, and on this very special of nights the lungs of the God-man would inflate with their very first taste of earthly air. The cool of the night would kiss His flesh. He would feel the caress of his mother’s touch upon nubile skin. He would cry. He would hear maternal assurances. God had truly taken on the human nature.

Psalm 2:7-8 prophetically declares this great moment.  “I will surely tell of the decree of the LORD: He said to Me, ‘You are My Son, Today I have begotten You. Ask of Me, and I will surely give the nations as Your inheritance, And the very ends of the earth as Your possession.’” Yet, this glory pronounced would come at great cost.

Of course the God of eternity would neither have to peer around the corner of time to see the future of His one-of-a-kind, very special Son. He knows that the greatest “labor ward” was upon the hill of Calvary where true life was given, the truest work of life would be performed. Where His Son would offer His life, so that by the grace of God He might taste death for everyone (Hebrews 2:9).

Today as we reflect upon the greatest gift ever known to man, let us remember that by the grace of a Father, in order to save the world from sin, He offered up His Son as that sacrifice. We cannot fully appreciate the blessing and birth of the Christ-child absent the prospect of His impending future.

We remember. We reflect. We mourn and yet, we celebrate.

May the peace which He gave at so great a cost, be upon you this season and forever.