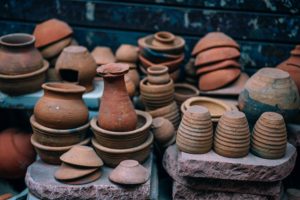 [The Shepherd’s Echo is a reposting of a previously published TheShepherdsPen].

This odd little nursery rhyme is embedded in most of our minds, and yet most have no idea to what it refers. I would surmise that most of us imagine an odd egg-sort of fellow who reclines on a wall only to fall off into a broken yolky mess, though actually, nowhere in the original story is there any indication that Humpty was truly an egg.

If we were to overlay that as a metaphor upon the human condition of brokenness we could say that mankind had it so easy, at some point was careless (though it was intentional), and that led to a seemingly irreparable fall, so much so that all the creation’s power, and all of the insight of men could not restore that broken yolky-ness to a position of fullness or wholeness. In fact, only a king, a divine King could restore that yolky mess to original perfection.

Actually, this metaphor works quite well as one looks upon the present state of scrambled-ness of people. Most would consider the many pieces of broken shell to be of little value and toss them aside. And who could even think of the impossibility of restoring something so broken as an egg yolk and shell? Who would, even so, desire to do so?

I suspect you know where I am going with this; we are the ones lying at the foot of the wall, and our brokenness, our damage comes in many levels of severity. Cracks and fractures, chips and pieces, and altogether shattered. My guess is that most of us desire to hide any brokenness of our lives, almost in shame. We seek to place these in the back closet where they are securely stored under lock-and-key. Some of our faults are self-imposed, some are brought on by the ravages of life; still, they are there.

I was made aware of a unique Japanese art form recently, which is centuries old; it is considered both an artistic technique, and a philosophy. It is called kintsugi. The art form is the process of taking broken pottery and seeking to restore it using lacquer mixed with powdered gold to hold it together; no effort is taken to hide the fractures, but rather to illuminate them. In regards to kintsugi as a philosophy, it regards the brokenness of any given object as something to be vaunted, rather than disguised. It would consider any such evidences of damage to be part and parcel to the history, or character of the object.

Obviously, the mind of the artisan, or the potter places a value of redemption upon any such broken vessels, and despite their brokenness desires to redeem them for future use. God is one such Potter.

Back to our own brokenness, and the state of mankind. Two notable passages in Scripture draw this out, as we are referred to as pieces of pottery: Jeremiah 18-19, and 2 Corinthians 4). (See Romans 9:19-21 as well).

It is very clear in both passages that the purpose of any such “earthenware” is to glorify God, and He has the Sovereign privilege to do as He pleases with His vessels. His divine fiat determines which vessels would continue to be used for His purpose.

“Can I not, O house of Israel, deal with you as this potter does?” declares the LORD. “Behold, like the clay in the potter’s hand, so are you in My hand, O house of Israel” (Jeremiah 18:6). He chooses to fashion vessels to His own liking. Just as the potter, He is sovereign over the clay and can choose to break or restore. In Jeremiah 19:10 God commissions an illustration to be given by Jeremiah to those who refuse to be vessels which honor God, they may be destroyed.

“Then you are to break the jar in the sight of the men who accompany you and say to them, ‘Thus says the LORD of hosts, “Just so will I break this people and this city, even as one breaks a potter’s vessel, which cannot again be repaired…” (Jeremiah 19:10-11).

The point is: we have a choice to be vessels for His glory or not.

The passage in 2 Corinthians 4:6-9 describes us as wanting vessels though deficient in our humanity. Still as we are willing, He performs His divine action as potter to reassemble those chards together as containers housing the most glorious treasure: The Light of Christ. “For God, who said, ‘Light shall shine out of darkness,’ is the One who has shone in our hearts to give the Light of the knowledge of the glory of God in the face of Christ” (2 Corinthians 4:6).

Though we are broken we are not cast aside. Though we are earthenware, we have value and purpose. Though we are repaired, or mended with gold, it is not to exalt ourselves; it is to give credit to the Potter who cared to redeem us as vessels to His glory. “But we have this treasure in earthen vessels, so that the surpassing greatness of the power will be of God and not from ourselves; we are afflicted in every way, but not crushed; perplexed, but not despairing; persecuted, but not forsaken; struck down, but not destroyed; always carrying about in the body the dying of Jesus, so that the life of Jesus also may be manifested in our body” (2 Corinthians 4:7-10).

What a privilege to be conveyors of the blessedness of Christ! Let’s face it; much as we may try to hide our faults, cracks are going to show. And that’s okay. The scars of gold serve to display His work of love, and manifest our history, our storyline perhaps, yet, more so they are a map of where God is leading us – to be vessels for His glory.

Not the King’s horses, nor the King’s men, only the King can put us together…for Him.