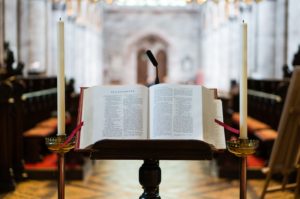 As a result of deep faith in the Godhead, I hold a high view of Scripture, as it is the eternal written Word of God (Isaiah 40:8), divinely breathed for the benefit of mankind (Psalm 119:9). 2 Timothy 3:16 affirms that, “All Scripture is inspired by God,” or God-breathed. God has given His Word, by the Spirit, through men who were moved, or inspired (2 Peter 1:21). Because God used humans to perform the act of writing, He also allowed them to write in their own individual styles, using their economy of words (Luke 1:1-4).

I accept the Hebrew Bible as being the Word of God, the Old Covenant, or Old Testament as it was actually a compilation about Jesus, the coming Messiah (Matthew 1:22; Hebrews 1:1-2; Galatians 3:24). I also embrace the 27 books that make up the New Testament. The Bible has been written both by divine and human efforts, and compiled by God for the benefit of the Church. The EFCA has held strongly to the Word of God to the degree that the question, “Where stands it written?” has become the unofficial litmus test of our beliefs and practices. This reflects the desire and commitment to be a people dedicated to the authority of Scripture.

The books that we affirm in the New Testament Canon are not there because mankind has permitted them to be there, they became canonical because no one could stop them from doing so. In other words, Christians believe the books of the Bible to be of divine origin (Proverbs 30:5) and deserving to be in the Canon because God has spoken them into being. The Synod of Hippo and the Council of Carthage “approved” the books of the Bible, but at best, mankind is only acknowledging or affirming that they emanated from God. The books that are included, are those that God desired to be in the Canon.

God so desired to restore fellowship with His people that He gave His Word to help (Romans 1:1-2). This article affirms the ability of the written language to accurately reflect the heart of God and His will for our lives. A great debate that has emerged is whether God is even knowable, and if so, can He effectively make His will known to mankind? I hold that the Bible is sufficient to effectively communicate the will of God for everything He desires us to perform (2 Timothy 3:15). The Scriptures act as our sole rule of faith for the Church. This principle, known as Sola Scriptura, proclaims that we embrace Scripture alone to lead, guide and direct by absolute authority of the Spirit. Thus, my belief directly dispels any notion that additional revelation would exist or come forth that would over-ride the stance of the Bible (Galatians 1:8-9). As such, I do not accept “sovereign revelation” of the Pope, or any others that would proclaim prophecy contrary to, or even in addition to, the Canon.

Therefore, the Bible is considered an infallible, sufficient, and relevant document that should thus be believed, obeyed and trusted if one desires to live in accordance with God’s will (Proverbs 30:5; John 17:17; Matthew 28:20; 2 Peter 1:4). I hold to the belief of inerrancy, the fact that the Scriptures are without error in the autographs (Numbers 23:19; Psalm 119:96). This is not the assertion that the subsequent copies by copyists, and transmission were without error. If we, as a people of God question the inerrancy of the Scriptures, we introduce a compromised Word of authority. If we accept the Word of God as having errors in their autographs, we run the risk of subjectively determining, from a human standpoint, which passages are true and which ones should not be obeyed. From this perspective it is certain we will choose to deny those passages that are the most difficult for us to accept, inevitably neglecting the full authority of the Word that God has intended (Proverbs 4:4).

Since this is true, it is my desire and belief to govern my life and myself in accordance to the Word of God (Psalm 119:9), and to rely upon the illumination of the Holy Spirit to give me understanding of God’s truth (1 Corinthians 2:10-14). I desire to use the full authority of the Bible to guide, counsel and direct my steps, both personally, and as they relate to the governance of the church as the Spirit guides (Psalm 119:105). In following this, it is my desire to be instructing from the Word, that which is most important to the edification of the Body of Christ (Colossians 1:28-29; Proverbs 6:23).