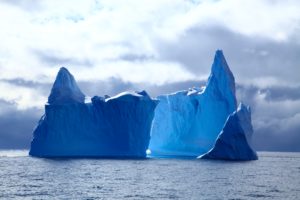 Anyone who has observed an iceberg has beheld a thing of massive beauty. It may not seem all that complicated, or majestic, but it is an amazing thing to behold. Some may have seen it pass as they stood on the shore, or sailed along on a cruise ship, or observed from the air, but in each case one could not rightly state that they had seen the entire iceberg. One could not categorically hold that they had observed it in its entirety for an iceberg is only partially seen by those above the surface. We know this; an iceberg is only 10 percent above the surface; 90 percent is below the waterline. In other words, the iceberg in its solid state is less dense than in its liquid state, so 10% or so rises above the waterline (following Archemede’s Principle of Buoyancy). The molecular structure assures this truth every time. We have a good idea that the portion above fairly accurately represents that which is unseen below, but we do make that conclusion based on logic.

We are faced with icebergs in the church every day. What does that mean, Kelly? It means that people are floating through the waters of the church every day. We see them, we monitor them, we evaluate them. We have to make judgments and decisions, in regards to those icebergs. The problem is there is a lot more to those “icebergs” than meets the eyes. So, how can we do that?

From an aerial perspective above, one can view a much larger mass of being, buoying the mere representation above–the tip of the iceberg; the matter below is often very different in shape than the mass above.

We may be forced to just consider the upper 10%, and we often do. But, sometimes those decisions land us in hot water.  We may simply guess at what lies below the surface, or we may be graced with divine discernment, Solomonic discernment.

Discernment: intuition, the idea that something is just not right, a gut feeling, a check in your spirit. The problem with discernment is trying to take all the facts that you know and make sense of them. Sometimes all the facts in the world just don’t add up. Discernment in leadership is having to decide based on all the variables that are observed, understood and known, the problem is we never have that luxury. Making decisions in leadership is like assessing an iceberg. We need to evaluate regarding the whole iceberg even though we can only see the top 10%. We need to evaluate the entire structure, having only a fraction of observable DNA. In the case of people, we have to make decisions based upon what we know, what we see, and perhaps some referrals. The problem is we are failing to see 90% that is below the surface. To make matters worse, sometimes the person being assessed may not be all that compliant and …transparent.

So, the challenge before us each and every day is to read between the lines, to see behind the curtain, or below the waterline. Discernment is making a judgment based on things not seen, listening to that check in the spirit, that gut feeling, that something is not reconcilable. The true gift of discernment is figuring out what is going on beneath the surface: Solving the unseen by measures other than empirical certainty.

Could we suggest that check may be divinely issued? Could we say that God has placed that caution within our spirits so that we may protect the flock? We may not have a chapter and verse, but maybe that yellow flag is an alert to step back, take some time and continue the observation.

Unfortunately, making judgments based on mere discernment, is one of the more difficult actions to justify, especially when it is not so popular with those around.  I have had times when the level of discernment needed was well above my pay grade; haven’t we all?

We cannot see how people act at home with their spouse and children. We cannot observe them at work. We do not know who they are at the computer screen, nor how they may talk in a group of friends. We are ignorant of their conversations in the shadows. We cannot see their motives. Yet, we need to make decisions as to how they might safely, and effectively fit into the local body.

Failure to discern can get us into much trouble.

Joshua and his crew had some heavy positive momentum going on, until they met up with the Gibeonites. Joshua 9:14…they were hoodwinked, bamboozled, and tricked into issuing a covenant to these grifters. In order to avoid decimation, the Gibeonites concocted a scenario whereby they may be able to avoid being wiped out; the plan was to feign impoverishment and perhaps, receive mercy. The Israelites saw with their eyes and not with their hearts. They did not discern, and they did not seek the will of God, the same mistake they made as when they sought to destroy Ai. And they paid dearly for it.

The divine mandate was to destroy all the inhabitants of Canaan. And yet, as they failed to discern wisely, and seek the Lord, they covenanted with those whom they were to destroy. In the end, they commissioned them to be hewers of wood and drawers of water; not only would they be spared annihilation, but they would be employed in the service of the Tabernacle.

Joshua and the leaders made a decision based upon the top ten percent, and they failed. If discernment is the ability to “see below the waterline”, to have a clearer picture, either by the gift of divine understanding, or discernment–What exactly did they do wrong? How did they fail to discern what was going on beneath the waterline?

Three strikes the Israelites committed in the exchange which set them adrift from their divine directive. One, they did not seek the counsel of the Sovereign Commander; literally the “mouth” of the Lord. They had open access to the mind, the will of God, and they failed once again to exercise it.

Second, the decision having been made absent of any appeal to divine counsel, Joshua and his comrades assessed the situation by their own eyes, through compromised human mechanisms. They adjudicated based solely on the presented 10 percent.

Third, the move they made came without patience. They imputed some level of urgency to process this situation when no such urgency existed.

Finally, after they had failed in all respects, they offered a deal to the charlatans which was not part of the divine mandate to categorically clear the land, nor did it appear to be a request by the Gibeonites. They ultimately disobeyed the direct specific command of Yahweh.

We cannot fault the Gibeonites as they were merely seeking to stay alive; they were willing to connive in whatever way they could to sustain their existence.

So how does this connect to the present day?

First, let us remember that our pastoral commission is to tend and feed the sheep, to guard against false prophets and christs.  We observe, we evaluate, we look for fruit which is visible, and we plead to the God of Heaven for divine counsel. Our leadership, our decisions, will have an effect on the health of our flocks and even upon our own spiritual health. If we are not careful, discerning and wise, we could wind up in hot water.

Second, let us understand that, in this fallen world, we will never see the 100% we desire. And let us also understand that not all bergs are bad, or even trying to hide something below. Still we can move methodically seeking guidance along the way. And yet, still we will not get it right 100% of the time.

In Heaven we will have 20/20 clarity regarding truth and discernment. In the here and now we must take clues, actions, and words as our understanding and we are limited to make decisions and actions based upon those minimal clues. Let us not leave the Sovereign God of all truth out of the equation.