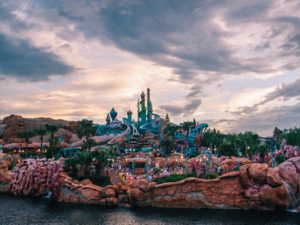 As a child, and for most of my adult life I had the opportunity to grow up in Orange County, California. Bright, sunny, open fields, and yes, orange groves. Beaches and mountains were all available destinations in the course of a single day. All kinds of distractions were at the beck and call of the adventurous mind. The locale allowed me to grow up in the shadow of what was to become known globally as Disneyland Park.

Many a weekend was spent in the Magic Kingdom, a dream of Walt Disney which was fulfilled as it opened July 17, 1955. As a little bit a trivia, do you know the 5 major theme areas that were part of the original park plan? I had to think about it a bit, but they were Adventureland, Frontierland, Tomorrowland, Main Street U.S.A., and Fantasyland. Interesting choices and names that acted as lures to draw visitors in to escape from the normalcy of their everyday lives, and of course, relinquish their dollars.

It is probably obvious that these areas of entertainment were not categorized as Realityland, or Epistomological Acres. People wanted to escape for just a bit; nobody wanted to go to attractions such as Overdue Bills, or the Negative Test Results, or Valley of Tears, or Truthland; those attractions would not have fared so well. But, let’s get real, life, real life is not bright-colored plastic, and giant animals and princesses hugging me. I appreciate Mr. Disney’s marketing genius, but …we, people need a healthy dose of reality, of Truth if we are going to navigate this life, and its afterlife.

A theme park may be great every once in a while to “get away from it all” but it seems that somewhere along the way distractions, and avoidance of such things as truth have become the norm. Truth it seems is only tolerable in small doses, relative, subjective, or neglected, abandoned, and scorned as the modern-day evil; as such truth is finding itself a difficult seed to find purchase in a concrete jungle.

But, we still live in an age of reality and Truth, and embracing the absence of Truth still has its consequences. Truth matters.

The Church has been assigned as one of the sentinels of Truth, in fact the greatest Truth of all. We are not offering some subjective “option” of truth; we are offering life at the highest level, in relationship with God Almighty. We are offering knowledge of the Narrow Gate, the Narrow Road unto salvation. True Truth!

“For the grace of God has appeared, bringing salvation to all men, instructing us to deny ungodliness and worldly desires and to live sensibly, righteously and godly in the present age, looking for the blessed hope and the appearing of the glory of our great God and Savior, Christ Jesus, who gave Himself for us to redeem us from every lawless deed, and to purify for Himself a people for His own possession, zealous for good deeds. These things speak and exhort and reprove with all authority. Let no one disregard you” (Titus 2:11-15).

The grace of God is revealed in the person of God’s Son, Jesus Christ. As such, believers are called to walk in a posture of holiness and obedience to the will of God. It is this body of believers who look forward to the blessed return of Christ to take them home, something in the mind of God before the foundations of the world.

Our mission, as we have accepted it is to communicate redemption through the blood of Christ, available to all men, and subsequent to that, to live a life of God-honoring devotion in worship to Him in every way. Our message of Christ, and the sure and certain hope of His coming to take His Bride home is the message of victory the world needs to have today.

Paul tells Titus, “These things speak and exhort and reprove with all authority. Let no one disregard you.”
Tell someone the Truth!
Encourage someone in the Truth!
Correct them in the Truth, if need be.
We have the “E ticket” to eternal life!

For all it has to boast, Disneyland will likely never offer any sort of Truthland, but God does…it is called the Church. As we rightly station ourselves upon the Word of Truth we operate as His outpost of grace to a longing world.