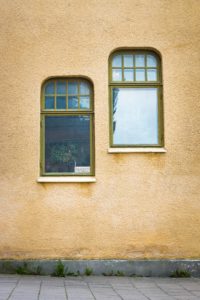 As we approached the doorstep of our friend’s house we noticed there upon the deck, beneath the window the body of a beautiful bird. Its breast was a brilliant yellow and its feathers of a rich green-brown tone. It was beautiful, still it was dead, and its limp and lifeless body told the all too familiar story that occurs each, and every day.

While in flight this creature had come down to the level of the window and perceived open skies as far as he could see but he was deceived. Flying at full speed the last thing it had seen was the reflection of unending skies in the window that were actually behind him. And then…snap, instant death. Life for him was over, and now he lay motionless on the deck, another casualty of deception. The window had revealed the promise of vast eternal horizons but in the end delivered a quick and brutal death to the unsuspecting victim.

I could not help but see the parallel of this poor bird’s flight upon the landscape of eternity. So many individuals flock to false churches and teachings each and every week thinking they are facing a future of promising blue skies, perhaps even eternity with God. But that is not what those theologies deliver. They teach ways that are not in accordance to the Bible. They offer the wide road to God that really leads to destruction (Matthew 7). Even many evangelicals have fallen for these errant theological systems as they are taken captive to the wily philosophies.

Paul speaks in length to these errant theologies, these false teachers and ways to death that will seek to deceive the elect of God. Colossians 2:8 says, “See to it that no one takes you captive through philosophy and empty deception, according to the tradition of men, according to the elementary principles of the world, rather than according to Christ.”

Wow! Don’t we see this happening in droves. The intelligentsia and philosophers of the day seek to play down the existence of God, certainly the existence of Christ, and the authority of the Word. As we drop our guard, this empty deception seeps into the church and erodes the faith of believers. As a result, many are lured into the devil’s snare of confusion.

Ephesians 5:6 communicates the devastation of such heresy, “Let no one deceive you with empty words, for because of these things the wrath of God comes upon the sons of disobedience.” There is going to be a comeuppance on those who teach such falsehood, and it isn’t pretty; it is the wrath of God stuff and all. Paul is saying don’t be lured in, yet the truth is that many unsuspecting are indeed enticed.

Dare I be so bold, so insensitive, so politically incorrect, so intolerant, so exclusionary as to say that if you are not seeking the God of the Bible through the orthodox understanding of Jesus Christ, you are headed straight for a pane glass window? Mmmm, yes I do wish to say that. If you are seeking to “find God” through any other source than Christ, you are mistaken, misled. But, even if you are headed that direction there is still time to redirect your way and avoid certain death. Turn now.

Straighten up and fly right!