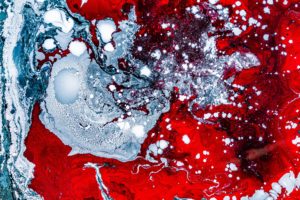 I remember as a boy my father bringing mercury home from work and letting we children play with it. How fascinating it was to observe the properties of that liquid metal. We would drop a little out of the bottle and watch it spatter into multiple perfectly circular “hemispheres” on the countertop or table…then, we would push them into each other and watch them “magically” converge into each other, growing ever larger, leaving no trace as ever having been separated. Perfect union!…Amazing!

Not surprisingly, as I reflect on this experience, I find great metaphor to the Church… How, because of the death and resurrection of the Christ, and the giving of the Holy Spirit at Pentecost, the Church was born, one perfect unified institution (or pretty close to it, at least for a while).

Well, over the years, we have seen that perfect union of the visible church dropped and spattered. Initially breaking down over the first 1000 years into various factions, and then definitely into two major factions in 1054 when the Orthodox Church was separated from the Roman Catholic Church. And then again, in the 16th century when the reformers were separated from the Roman Catholic Church and labeled “Protestants,” and the “mitosis” has continued exponentially. Subsequent years have seen multiple mercurial spatterings into what now is identified as 41,000 various global Christian denominations and organizations. Wow! Such a dismal reality of that which is to exhibit such unity.

But such is the institutionalized church, though the true Universal Church was never meant to look like this. Christ prayed for unity in John 17:20-23, “I do not ask on behalf of these alone, but for those also who believe in Me through their word; that they may all be one; even as You, Father, are in Me and I in You, that they also may be in Us, so that the world may believe that You sent Me. The glory which You have given Me I have given to them, that they may be one, just as We are one; I in them and You in Me, that they may be perfected in unity, so that the world may know that You sent Me, and loved them, even as You have loved Me.”

If you read those words they are sobering. What Christ is talking about is an intimate relationship with each other and the Godhead; I wonder if we will ever realize that unity for which Christ prayed in the Garden. Christ has imparted a measure of His own glory that we may be able to reveal this unity. Now, I know there are brief times of demonstrated unity when true churches come together, but so seldom; we have such distinct lines of demarcation for sure.

I do know there will come a day when like those guided little circular silver portions, each individual will miraculously be summoned heavenward at the rapture of Christ, to the Marriage Supper of the Lamb and we will be forever positionally and experientially unified as the Bride of Christ – with no lines of ever having been separated. Perfect union!.. Amazing!

I desire the mercurial church that is the picture of perfection of unity, like that prayed for by Christ. Sad that we have to wait until then to experience that pinnacle of pure Church unity.

FYI, there will come a day when all the redeemed in Christ will be living it out together, whether Evangelical Free Church, Free Methodist, Nazarene, Baptist, Assemblies of God, Four Square, Lutheran, Anglican, Presbyterian, Methodist, or independent; if they have been redeemed by the blood of the Lamb, you will be one with them for all eternity, and corporately we are joined to our husband Jesus the Christ.

Wouldn’t it be great if we could demonstrate a portion, even a portion of that demonstrated unity right now!