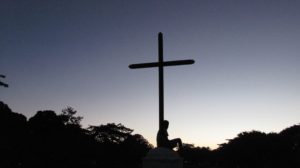 I remember as a kid in grade school often waiting for someone to open doors around campus, either a door to the classroom, to the cafeteria, or to the utility closet which held the sports equipment. We had to wait because someone who had the correct key had to open the door for us. Usually, it was a man in a grey shirt who would come rolling up on one of those little golf carts bringing a lump of keys on a ring, one of which would grant entry into that secured location. He would try many keys, for out of that entire conglomeration, it was one that he was looking for, as only one would work.

To anybody who believes in a god and an afterlife, it probably sounds like a pretty brazen, and even arrogant statement for me to say that Jesus is the only key, the one and only way to know God, and thus enjoy the afterlife. Yeah, I know that sounds pretty effusive, but isn’t that pretty much what every other religion is promoting as well, that their understanding of their god, and their salvation is the right way? Seems like if one doesn’t subscribe to an “all roads lead to heaven” sort of theology, there is a problem, but in reality, someone’s gotta be right and someone’s gotta be wrong. If somebody does believe in a pluralistic, or “many roads lead to heaven” then there is just as big of a problem because then nobody is absolutely right, and nobody is really even wrong, which is logically untenable blah-blah theology.

So, what in the world gives me the audacity to make such a declaration, that Christ, Jesus Christ is the only way to know God? For that, I gotta stand on the Bible, God’s Word to mankind. Jesus himself stated in John 14:6, “I am the way, and the truth, and the life; no one comes to the Father but through Me.”  Kinda puts a dent in the old many-roads-to-heaven thingy, huh? This understanding is further cemented by Peter in his sermon in Acts 4:12, “And there is salvation in no one else; for there is no other name under heaven that has been given among men by which we must be saved.”

That means that no other name called upon in all of existence can deliver salvation…to anyone…ever! In our culture, there is a pretty big ring of keys promising to grant entry into eternal life, but only one will indeed work. The rest of those “keys” are worthless. No other names will produce the desired result of reconciliation with God. No amount of good deeds, good thoughts, or any amount of cash doled out for benevolent concerns. No ancestral considerations will work either, nor your dog, a pretzel or your favorite “lucky” shirt. Nothing saves but the Name of Jesus.

So, am I being arrogant? Bold? Naïve? No, I am merely affirming the truth of Jesus, an apostle, and the Word of God. I’m not just randomly trying to tweak anybody but I would say that I am on pretty solid ground. Look, I didn’t make the rules, I just read The Book and it says people are saved, brought into a relationship with God, and eternal life with Him only by the Name of Jesus Christ the Nazarene. No other Name.

One Key! Jesus Christ the Nazarene.