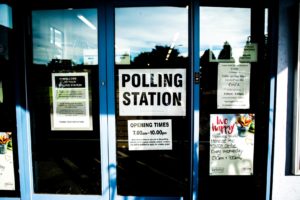 [This is an article written several years ago, before an election-a reminder of the heart of Christ].

In just a few months the pulse of the American people will be taken in one of the most noble of democratic arenas: the voting booth. Elephant and donkey hair will fly among the carnage as sides face off to see who will set the course of America’s future. Citizens will make their way into the booths armed with voter guides, convictions, and opinions to assure their vote is not wasted.  Once again candidates and propositions will be determined with the mighty wielded pen according to the amount of ink in the box. Will the results be according to your desire? Will they be better than past verdicts? Or, will America continue to navigate through the course of familiar, yet murky, waters of uncertainty?

To be fair, neither side has done well; both have failed with equal proficiency. Often votes are merely for the “lesser of two evils.” We are not voting for someone, we are voting against something or someone else, or refusing to vote at all. There is doubt as to where are we, as a nation are going as the pall of uncertainty and anxiety hangs over the land. Perhaps our agendas are so nebulous because our core values and concerns are not in alignment with the Ultimate Voter Guide: God’s Word. How far off the mark we have come since the founding days of this nation!

In John 6:38-39, Jesus defines His own agenda, “For I have come down from heaven, not to do My own will, but the will of Him who sent Me. This is the will of Him who sent Me, that of all that He has given Me I lose nothing, but raise it up on the last day.” That platform is clarified even more in Luke 19:10, “For the Son of Man has come to seek and to save that which was lost.” What a simple yet, powerful purpose statement!

Although Jesus is a great promoter of social justice, this is not his primary manifesto. Although He champions the value of women, this is not his main objective. He is not exceedingly concerned with housing foreclosures, taxes, military occupations, or the economy. He is not obsessed by spiraling employment rates, or escalating interest rates. He is not overly preoccupied with habitats of spotted owls even though He created all of nature and holds it together. He is all about doing His Father’s will; He is concerned about finding the lost and bringing them to new life in Himself.

As a nation are we concerned about what Christ cares about? Or are we so distracted with “incidentals” that we have lost sight of our greater calling. Souls are streaming to an eternity, unreconciled to God. I suggest if we had a greater heart for God, and were willing to be governed by His Word, we would receive a greater blessing upon this nation. As it is, so much of who we are stands opposed to the Word and will of God. How can we expect peace, prosperity and blessing when we willfully elect to stand in opposition to His Word?

Its obvious governmental bodies are not going to solve this problem. Not senators. Not congressmen. Not any president. No matter how many doctorates, no matter how much money, no matter how much experience our elected officials have, nothing will solve our problems unless they solve the greater issue of our nation…Pride–the willingness to set aside God’s direction for this nation and choose our own. Man’s agenda won’t cut it. Republicans won’t fix it, neither will Democrats, or Independents. Rather, it must start in the voter booth of each American–the heart.

That beacon in the far distance is the light of God’s Word, given so that we might direct our lives in accordance with His will. Some of America’s brightest moments were when we basked in the Great Awakening; the revival of a nation which had been lost in slumber. The clock is ticking; the snooze button has been pushed all too often. It’s time to wake up again America.

While there is still time, “Vote for God!”

(I am Kelly Larson, a follower of Christ, and I approve this message).