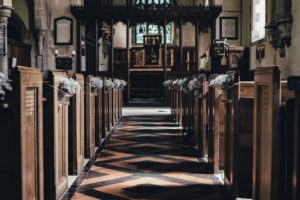 Many people when they think of a church may be drawn to think about the pastor of that church as though that pastor defines that church and what that church is like. But did you know that a church should not be known that way, as it is the Church of Jesus Christ and He is the head of any true Christian church. Part of the problem over that last few hundred years however, is that clergy have been less than willing to share the burden of ministry.

Did you know that Christians are all “clergy” in a sense? Peter tells us of this in 1 Peter 2:5, “you yourselves like living stones are being built up as a spiritual house, to be a holy priesthood, to offer spiritual sacrifices acceptable to God through Jesus Christ.” What this means is that we no longer need to approach God through any particular priest or pastor; instead, we are allowed to approach on our own through our great High Priest Jesus Christ, because of the sacrifice of His body and blood which makes us holy if we trust in Him.

What this means practically is that we have each mean called into the priesthood, and that carries with it a pretty high bar. Instead of offering animal sacrifices as did the priests in the Old Testament, we are to offer sacrifices of praise (Hebrews 13:15), and sacrifices of our own lives. Paul says in Romans 12:1, “I appeal to you therefore, brothers, by the mercies of God, to present your bodies as a living sacrifice, holy and acceptable to God, which is your spiritual worship.” This affirms our need to be a sacrifice, living sacrificially for Christ, and it means we are to be holy, living clean lives as we come before God.

A particularly sobering event occurred in Leviticus 10:1-3,   “Now Nadab and Abihu, the sons of Aaron, took their respective firepans, and after putting fire in them, placed incense on it and offered strange fire before the LORD, which He had not commanded them.  And fire came out from the presence of the LORD and consumed them, and they died before the LORD”. Pretty severe. These 2 guys were called to be priests and to approach God on behalf of the people and yet they made the mistake of being careless or irreverent before the Lord.

Now, the consequences today do not seem to be so immediately felt, but we still are called to be holy before God. 1 Peter 1:15-16 makes that clear, “but as he who called you is holy, you also be holy in all your conduct, since it is written, ‘You shall be holy, for I am holy.’” There are a lot more priests nowadays, and a lot more temptations perhaps, but we are to be no less holy in our conduct; we have been anointed for such a task.

Did you know that? Yes, we have been anointed for the task of priesthood in a similar fashion as was Christ when He was anointed by the Holy Spirit at His baptism. Paul says in 1 Corinthians 3:16,   “Do you not know that you are God’s temple and that God’s Spirit dwells in you?”  Pretty strong responsibility, but what a great privilege to be called to embrace the presence of God and represent Him in this way.

So remember that you are a priest if you are a child of God, and you have been called to one of the highest privileges imaginable – to serve the Living God.

Do it in a way that honors Him and demonstrates the holiness within.