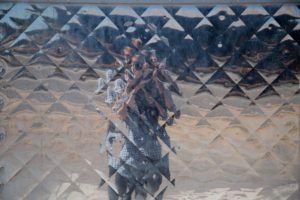 A term was coined in the early eighties to describe a particular leaders’ ability to spin his “mojo” and convince people that something deemed “impossible” could actually be believed and accomplished against all odds – essentially that the laws of logic and common sense could be suspended long enough to do something previously regarded as “undoable.” This phenomenon was termed a “Reality Distortion Field.” It actually may have allowed some crazy good things to be done, as people could “suspend” reality long enough to figure a way out of a seemingly insurmountable problem. Perhaps, it merely anesthetized “fear” long enough to press on through the monumental barriers. I would imagine those leaders (coaches) in sports do this all the time in the pre-game and half-time talks in order to ensure a victory over a looming opponent.

Sometimes leaders perform this maneuver upon themselves, temporarily suspending the laws of logic and personal conception in order to initiate this process, sort of a The Emperor has no clothes sort of thing – but in a constructive way.

Perhaps, in ignorance, we unwittingly engage in this sort of “thinking” ourselves, in regard to religious thought. We close our ears and eyes and refuse to believe something, much in the same way a child would hold their ears and close their eyes and proclaim, “I can’t hear you,” when they do not want to be confronted with the truth. Yes, we as adults do this to ourselves at times. Some would call this simply selective delusion, but let’s just go with “Reality Distortion Field” for now.

Case in point – many times I have heard the declaration, “I refuse to believe in a God who would allow evil and suffering.” Fair enough. We live in a land of freedom of speech and all, so these words are allowed to be opined without fear of punishment. The problem is that part of this statement is an ontological argument, as to the mere existence of God. The other is a subjective denial of his character, as if to say our belief in the divine is dependent upon our affirmation of his character attributes.

Here is the problem. Has anyone ever denied that Hitler existed because he was an evil man? Has anybody ever denied the being of a government simply because they do not affirm its policies? Has anybody ever denied the existence of Brussels sprouts because of their smell or taste? (Sorry, I realize that is a highly subjective and perhaps offensive analogy if you’re fond of the rascals). The answer is, “No” the two should not be mixed. Mother Teresa is no more a real entity because she is nice than if she were a “meanie.” For that matter, fictional Tinkerbelle is no more a reality because she… (She? He? It? Oh well, you get the point) is cute or benevolent.

A beings’ existence (or essence of being) is not dependent upon its character qualities. You can say that you don’t believe in God, (or that, “You refuse to believe in a God…” which is yet another derailment of ontological logic in and of itself), or you can say, “I don’t like God because…” But let’s keep the lines of logical argumentation clear.

Sure, you can elect to deny the existence of God, but logically and consistently can you do that according to something you don’t like about him? Say, “No.” It’s the only correct answer.

Incidentally, the whole problem of evil and suffering is inexorably linked to God’s allowance of us to choose, it is called “free will.” In other words, God is allowing us to choose our direction – to make choices, many times getting us into problems and allowing those with a marked propensity toward evil to cause suffering to others, or hedonistically serving themselves which effectuates the same result; sometimes our actions simply directly cause damage to ourselves though we typically don’t like to admit that, and would prefer to blame others, or God for our self-inflicted suffering.

This is like saying, “I don’t believe in God because he allowed me to exercise my free will, and now I have to pay the consequences.” To dislike God for this is to say, “I want God to honor me, and not ‘power trip’ me, and allow me to do what I want, but I also want him to curtail, or restrict the free will of others, so I won’t bear the brunt of their evil actions.” Yeah, that’s logical!

When it all comes down to it there is a standard of reality that transcends our existence. There is absolute truth, which transcends our beliefs. We are not the standard by which anybody’s existence (or morality of character) is measured, God is. Can you imagine if Hitler doubted his existence because he thought he might be an evil man? Of course not, it’s likely he defended his evil in light of his own reality distortion field.

At the end of the day, it comes down to integrity – the integrity of the question and the character of your own being. Is God real? Answer that along ontological reasoning. Is His character faulty? Answer that along reasonable, objective standards outside of yourself. The debate needs to be propelled along accepted parameters of logic; we really don’t move the argument along if it is emotionally driven.

So, the question I pose is, “Are you living in a Reality Distortion Field of your own making or do you have the logical integrity to face these questions of existence and character independently, and intellectually?” If the answer is, “No” then you are comfortable living in that less-than-willing-to-face-the-real-world mentality – your very own reality distortion field. If the answer is, “Yes” then I would suggest that true reality could be in your future.