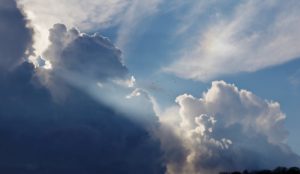 “There is a God-shaped vacuum in the heart of every man which cannot be filled by any created thing, but only by God the Creator, made known through Jesus Christ”– So contends Blaise Pascal, the famous French theologian, and philosopher. Now, I am not aware of any such Scripture specifically affirming the statement, but Romans 2:15 speaks of the Law as being written upon the hearts of men. Though the metaphor may be limited in some capacities, the imagery is profound.

The idea is that there exists a natural deficiency in the soul of man, a void which only one remedy can truly fill; that shape, that reality is none other than God. Our souls instinctively know that; we cry out for that. We search high and low for that God-shaped figure to complete us. We look around every corner, in every book, down every theological alley seeking to find it. We may stumble upon and accept physical satisfaction as that “god.” We often find that one-of-a-million religious pursuits offer a measure of satisfaction. Maybe it is something that only numbs the pain, or something which makes us feel euphoric for a while. People seek to come as close as they can to filling that emptiness, often times falling terribly short of what only that true sovereign being can provide. Man seeks God, or something like Him.

Paul speaks of a time when this search would be true, in Second Timothy 3:1. “But realize this, that in the last days difficult times will come. For men will be lovers of self, lovers of money, boastful, arrogant, revilers, disobedient to parents, ungrateful, unholy, unloving, irreconcilable, malicious gossips, without self-control, brutal, haters of good, treacherous, reckless, conceited, lovers of pleasure rather than lovers of God, holding to a form of godliness, although they have denied its power; Avoid such men as these.”

Oh, wow! Paul lists the supposedly god-shaped solutions sought: self, money, arrogance, unbridled excesses, hedonism, all things which offer a poor substitute for God. But they limp along with a fourth-rate option to fill the raging abyss. Each of these options promises some form of fulfillment, but they are truly absent any power to heal or to save.

One can begin to see just how compromised individuals are willing to be. Nothing. Everything. Something. Anything to suppress this gnawing hollowness within the soul. One has a greater understanding how false religions make their way into the desperate heart of humanity. Some, I am sure, feel they have found the perfect shaped god, when in fact, it will fail. Even people who think they have found God, may have missed Him by a mile.

People are looking to be relieved of the guilt, the void, the absence of meaning so they get as close as they can. Yet, as Paul said, “holding to a form of godliness, although they have denied its power.” The bottom line is unless one has found God through the redemption of Christ and His work, then the god they have chosen has no true power. No power to save. No power to deliver from death. No relationship offered with the One True Sovereign of all.

One such “flavor” of this God, or something like Him is called Moralistic Therapeutic Deism; it is a term that gained traction a few years back from a book called Soul Searching: The Religious and Spiritual Lives of American Teenagers (2005) by sociologists Christian Smith and Melinda Lundquist Denton. The idea promoted is that the young people “believe” in a god of sorts, though he is disengaged from his creation (deism). He is, however, a moral god, and desires people to be moral as well, in order to get to Heaven; as it is held that only “good people” go to Heaven when they die.

So now the ugly monster rears its head. Rather than repentance from sin, or conviction which turns us to God, rather than a God who loves us, this “system” promotes a moral lifestyle as a means of therapeutic recovery. Finding and filling the god-shaped vacuum, and feeling good on the way to Heaven.

In that respect, it is only “Christian” hedonism, and it truly offers no promise of biblical salvation.

My great concern is for people who believe they’re in the camp, when they’re not. How many are living a pretty moral life, one which seems to have God at the center of it? I know people right now who would call themselves “Christians” though they could not articulate what the Gospel is, or rightly communicate why they would be granted access to Heaven. I know people right now who could articulate a high level of theological precision, but the fruit of someone truly devoted to Christ is scant.

The search to fill that vacuum, the search for God or something like Him really needs to be narrowed down to the one True answer: the God of the Bible– “God the Creator, made known through Jesus Christ.” Nothing else, no one else will do.