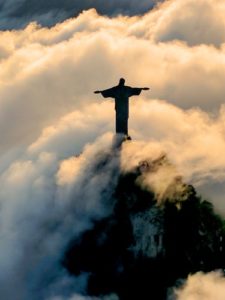 As stated earlier, Jesus is one of three Persons of the Godhead (Colossians 1:15). It is this second person of the Trinity that became flesh (John 1:1,14). He was, and still is one person but with dual natures (John 1:14). Contrary to what some thought, all of the fullness of deity dwelt in Him (Colossians 2:9). At His incarnation He took on the dual natures of both God and man. He is fully human and fully divine (Luke 1:31-32). Unlike the Docetists, who believe that Christ never actually had a body, but was only a spirit, I hold that He became flesh like us. Others erroneously believe that Christ was only a man and lacked any spiritual or divine nature. Though it is difficult to grasp, deity and humanity exist, each in their entirety, in the person of Christ.

Though He appeared in the flesh among us at a finite time, we do believe that His Sonship to the Father was eternal. He did not begin to be the Son at the incarnation, but from eternity was the Son (John 1:1-2). It was however, at the incarnation that the Second Person of the Trinity took upon Himself the nature of man (Philippians 2:7). He was conceived through the Holy Spirit (Matthew 1:18, Luke 1:35), so as not to be tainted with original sin of mankind, and delivered through Mary, that He might become flesh (Luke 1:26-31).

Throughout the Old Testament a Messiah was promised to Israel (Genesis 3:14-20; Isaiah 7:14, 9:6, 2 Samuel 7; Micah 5). The Redeemer actually was the Savior of mankind, both Gentile and Jew (Acts 10, 15). It was in the person of Jesus Christ that this Messiah would be manifested. Jesus, the second person of the Trinity, was born in the likeness of men (Philippians 2:7) to become the Messiah to all mankind, as His life was offered up as a sacrifice (Hebrews 10:10). As such, He was a true human being. He wearied (John 4:6). He thirsted (John 19:28). He was hungry (Matthew 4:2). And most of all He suffered death at the hands of Pilate upon the cross (Luke 23:46).

He came into the world a sinless being, and lived a sinless life that was pleasing to the Father (John 6:38, Hebrews 9:14). He lived to do the will of His Father, and to redeem mankind from their sinful condition. He was persecuted by the people of His day and was put to death on a cross for no valid reason. He physically arose from the dead (Matthew 28:1-10), in a resurrected body, appeared to many, and now sits at the right hand of God, interceding on behalf of all those who have trusted in Him (Ephesians 1:20; Hebrews 8:1, 10:12).

Christ is the head of the Church (Colossian 1:18). In fact He fulfils three major offices of authority set forth in the Old Testament. He is a Prophet in that He proclaimed the Word and will of the Lord. He is a Priest in that He offered up the perfect sacrifice, Himself, for our sins (John 1:29; Hebrews 7:17). He continually strives to bring us closer to God as our advocate (Romans 8:34), and like a priest he continually prays, or intercedes for us at the right hand of the Father (Hebrews 7:25, 8:1). Finally, Jesus serves as King as He is far above all rule and authority and power and dominion; everything is under subjection to Him (Ephesians 1:21; Colossians 1:16).