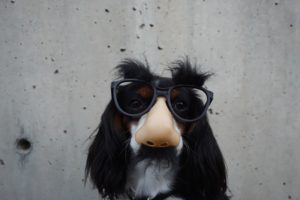 For those of us who grew up in the fifties and sixties we are well aware of that iconic toy, Mr. Potato Head. Hugely successful over the course of its sixty-year reign, it is a plastic-bodied potato into which various features could be stuck to characterize the object into various facial distinctions or personalities. Part of the fun is mischievously placing the parts in the wrong areas for amusement. The toy has gone through many iterations and characters as a result of its success.

Facial parts placed in the wrong areas on a potato can be amusing, and cause us to laugh when a nose is inserted where an eye should be, or an eye in place of a ear, but that sort of tomfoolery doesn’t bode well when applied to a church, the body of Christ.

God has so designed the body of Christ to function efficiently, much in the same way a human body functions. But that sort of efficiency is partly due to the parts being in their proper locations and performing their proper functions. How many times have we attended a church and asked ourselves the question, “Why is that person serving in that capacity?”

It may be that he thinks he is the one who is ideally suited to perform that job. It may be that, in spite of his shortcomings, he is performing that job because nobody else has been willing to step up and fill that position. It may be he is over-extended and not able to do well all that is being demanded of him. But it could be as well that a particular person poorly suited for the job or position required is filling that void because the right person isn’t stepping up. (Stop. Go back and read the last sentence again). In any case that is not a good demonstration of a well functioning body of Christ. In effect, it becomes a body part in the wrong place, a Mr. Potato Head Church.

Paul gives us good models of how the body of Christ is to function in Ephesians 4 and 1 Corinthians 12. God has given gifts “for the equipping of the saints for the work of service, to the building up of the body of Christ” (Ephesians 4:12)… “from whom (Christ) the whole body, being fitted and held together by what every joint supplies, according to the proper working of each individual part, causes the growth of the body for the building up of itself in love” (Ephesians 4:16). The purpose of our gifts is to cause growth- both in numbers and spiritual maturity and that happens as the church functions as a well-tuned “machine”.

1 Corinthian 12:14 reminds us that we’re not meant to do it alone-  “For the body is not one member, but many.” 1 Corinthians 12:18 affirms that this was God’s plan all along. “But now God has placed the members, each one of them, in the body, just as He desired.” The absolutely positive affirmation that God has not intended a Mr. Potato Head Church, but a healthy, vibrant and intentional Church designed to build up the body to maturity. If the parts are in the wrong place or parts missing, well then somebody else moved them there or someone is not showing up.

1 Peter 4:10 assures us that everyone one of us has received a gift, and as we have received it we are commanded to use it for the benefit of the Body of Christ. “As each one has received a special gift, employ it in serving one another as good stewards of the manifold grace of God.” Don’t be fooled, God has given you a gift to serve the Body, the question is, “Are you using your gift to do just that?”

In the vernacular of Potato Head theology, “For those who have eyes to see,”